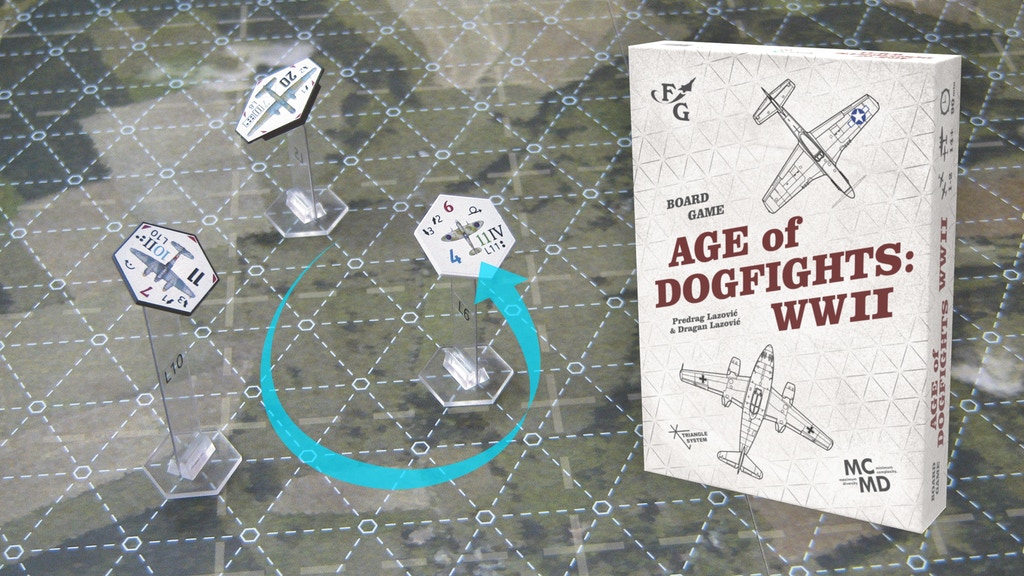 The next one is:

The final version of rules for the game AoD:WWII has not been written yet. The rules will be based on the AoD:WWI game for which we have received a lot of positive comments from gamers around the world. In preparation for this campaign, we made a dozen demo sets of AoD:WWII, and we shipped them to several addresses. The gamers who got this game sent us their impressions, comments and suggestions, which will mean a lot to us when making the final rules.

We also received many comments related to some characteristics assigned to the aircraft. We have considered all the remarks and comments, primarily referring to the values of the weapons of individual fighters. We have now adjusted some values, so that the fighters armed with cannons get higher values. The latest layout of the control panels for all aircraft is shown in the images below. This version is not final either, and before printing, we will once again reconsider all the aircraft characteristics.

Among the planes we announced is the American scout RB-26C. This designation was used only after the end of WWII, and before that it was called FA-26C. However, this version was not in use during WWII, but later, in the Korean War and Vietnam War. Therefore, instead of the RB-26C Invader, the basic game will feature a reconnaissance version of the A-20 Havoc: F-3A.

We have also adjusted some of the values in the Firing chart, and the new version can be seen below:


We decided to provide five blue dice per set instead of four, with the following numbers:

In this game, in addition to the possibility of tilting the token up or down ("pitch tilt"), we introduced a new variant of tilt – "roll", in which the aircraft is tilted to the side. These two types of tilt can also be combined (for example climbing + turning). In the very rare case when one plane needs to be positioned at a point on the board already occupied by another aircraft (but at a different altitude), and the lower aircraft is tilted, a tilt compensator is used. The compensators that were in the AoD:WWI game and in the demo version of this game are not adapted to the new "roll" tilt, so we solved the problem by designing a new, universal tilt compensator.

It is realistic to expect that all stretch goals will be reached in this project, considering that the funds raised in the pledge manager will also count. With an initial 60 and probable 40 tokens (stretch goals) the set will contain 100 aircraft (41 different types). The AoD:WWII set has everything you need to play games with different scenarios. We wanted to make sure that the box contains the optimal number of elements and that the price remains acceptable. To play with a larger number of aircraft (with aircraft from expansions), some additional elements may be needed. As in the previous campaign, we will offer many different add-ons in the pledge manager.

The game contains a board (70×63cm) consisting of three bi-fold segments, with land on one side and water on the other. The board is the same as in AoD:WWI, so backers who have that game can put together two boards to play large games. In this project, we offer several variants of boards as add-ons:

In addition to these add-ons that are directly related to the game, we will offer a few more different ones that will contain various elements that may be of interest to backers. For example:
1) bases for altitude stands or tokens in different colors (transparent, black, white, red, blue, yellow, etc.).
2) blank dice
3) cubes in various colors
4) several combinations of small storage boxes

We use this opportunity to share this review of AoD:WWI that was just published:


In the Age of Dogfights WWII project, Forsage Games intends to cover all the battlefields and all significant types of aircraft that participated in WWII. However, this will require a huge effort because the war lasted for a long time and there were many countries with their own planes. That is why we’ll divide it into several phases.

As we have already announced, in the first wave of shipping, only basic games will be sent. The campaign is already in its second half so we can estimate more or less accurately the final outcome. Realistically, we can expect around 1000 backers in total to help our project and we thank you all. Given that we have increased our production capacity and that this game has similar elements to the previous one, it seems likely that we will do the first wave of shipping at the end of 2021. That is why we will offer as many as 5 expansions and 3 mini-expansions in the pledge manager, since we believe that we will be able to produce everything and start delivering in March 2022, as we stated at the beginning of the campaign.

Before listing the expansions that will be offered in the pledge manager, we want to say a few things about the prices. The backers have noticed that the basic AoD:WWII game is $10 more expensive than the AoD:WWI. There are three reasons for this:

1. We didn't properly estimate the production cost of AoD:WWI. We introduced some new elements and used the highest quality materials available to us, so we realized that the real price should have been at least $5 higher.

2. AoD:WWII has more elements – there is a greater number of the existing ones (altitude stands, cubes, markers, tokens, etc.) and there are also some brand new ones (dial counters, speed indicators, a book with scenarios, etc).

3. The price of raw materials for the production of plastic elements has drastically risen in the past period (for about 90%).

On the other hand, the expansions we will offer in this project will be cheaper than the expansions for AoD:WWI (relative to the number of tokens). Expansions will contain a maximum of 100 tokens + associated control panels + brochure (scenarios and aircraft description) + aircraft chart. The formula for calculating the price is as follows: $0.25 for each token with control panel + $8 for the box and other elements. So, an expansion with 100 tokens will cost: 100 × 0.25 + 8 = $33.

Mini expansions will contain a maximum of 50 tokens + associated control panels + brochure + aircraft chart, and the price is calculated according to the formula: $0.25 for each token with control panels + $5.5 for a box and other elements. So, the most expensive mini-expansion will cost: 50 × 0.25 + 5.5 = $18.

Micro expansions will serve as a supplement to the basic game and expansions. They will contain from 12 to 30 tokens with associated control panels and an aircraft chart. All elements will be packed in a zip bag. Price: $0.25 for each token with control panel + $1 for aircraft chart and packaging.

This expansion will contain 100 tokens and it will feature every important American and Japanese aircraft from the Air Forces and Naval Forces. On the American side, these are: Wildcat, Hellcat, Corsair, P-39, P-40, A-20, A-26, B-24, B-26, B-29, Helldiver, Avenger, Dauntless, Devastator, Catalina, Coronado, Commando, and a few more. On the Japanese side: Zero, George, Hien, Ki-100, Raiden, Hayabusa, Shoki, Hayate, Gekko, Betty, Sally, Peggy, Frances, Sonia, Grace, Val, Kate, Jill, Judy, Dinah, H8K, Ki-57, and a few more.

This expansion will also have several related micro expansions. Some will contain additional types or subversions of the aircraft, and some will feature the types that are already represented (but in larger numbers). There will also be one micro expansion with aircraft used by Australia (Boomerang, Short Empire, Buffalo, P-43 Lancer, etc.)

This expansion, which covers the initial period of the war in Europe (1939-1941), contains airplanes from four countries (100 tokens with related control panels).

The greatest battles of WWII were fought on this front, both on land and in the air. The expansion will include aircraft from the beginning to the end of the war on this front (1941–1945) – there will be 100 tokens with accompanying control panels.

Romania was on the German side of the war, and this expansion features the following Romanian aircraft: IAR 80, IAR 39, and IAR 79.

Hungary was also a German ally, and its pilots fought against the Soviets using MÁVAG Héja and Weiss WM-21 Sólyom.

In addition to these two countries, Croatia and Slovakia also fought on the German side and had many ace pilots. They mostly used German planes (Bf 109 G), which will bear their national insignia in this expansion.

After the catastrophe at the beginning of the war, the Soviet Union gradually acquired new types of aircraft so they could have a more or less equal fight with the experienced and well-equipped German air force. The types of Soviet aircraft in this expansion are mostly of their own construction and production with some additional types obtained from the Allies: Il-2, P-39 Aircobra, I-16, Yak-3, Yak-9, LaGG-3, La-5, MiG-3, Pe-2, Il-4, Pe-8, Tu-2, Yer-2, Po-2, Su-2, Be-4, and Shche-2.

Finland also fought against the USSR in the Continuation War, and one micro expansion will feature a fighter of Finish construction and production – VL Myrsky, alongside the American B-239 Buffalo, French M.S.406 and Italian Fiat G.50.

In the African Campaign expansion, we feature the aircraft that participated in battles at the whole Mediterranean theater. The Italian aircraft are the most present. Unlike the Germans, who decided on a small number of aircraft types to be mass-produced, the Italians had a huge number of constructions. There were over 10 types of single-seat fighters. All significant Italian aircraft will be featured in this expansion: Fiat CR.42 Falco, Fiat G.55, Macchi C.200 Saetta, Macchi C.202 Folgore, Fiat CR.25, CANT Z.1007 Alcione, Caproni Ca.309, Fiat BR.20 Cicogna, Piaggio P.108 Bombardiere, Savoia-Marchetti SM.79 Sparviero, Breda Ba.65, Reggiane Re.2002 Ariete, Savoia-Marchetti SM.85, CANT Z.506 Airone, Fiat G.12, and Savoia-Marchetti SM.82 Marsupiale.

The Battle of Britain is an important expansion as it represents the largest and the most significant of all air battles. Gamers will have the opportunity to fight in large battles with the participation of all types of aircraft that were used at the time.

This expansion will contain 66 tokens in total, and its price will be $24.5.

Also, this expansion will have several related micro expansions with aircraft that had less important roles during the battle, as well as Italian aircraft Fiat CR.42 Falco, Fiat G.50 Freccia, and Fiat BR.20.

This mini-expansion will contain all the most important gliders from all the countries that produced them. There will also be enough transport aircraft that tow those gliders. We are preparing customized rules for the movement that will apply to gliders, as well as rules for landing. In this mini-expansion, there will be interesting scenarios with gliders in the lead role. It will contain 50 tokens with related control panels.


We would like you to write your suggestions and comments on this update. We will take everything into account when making the final lists of aircraft for each expansion. The definitive content list of all the expansions (including mini and micro) will be detailed in the pledge manager.

The next stretch goal is: